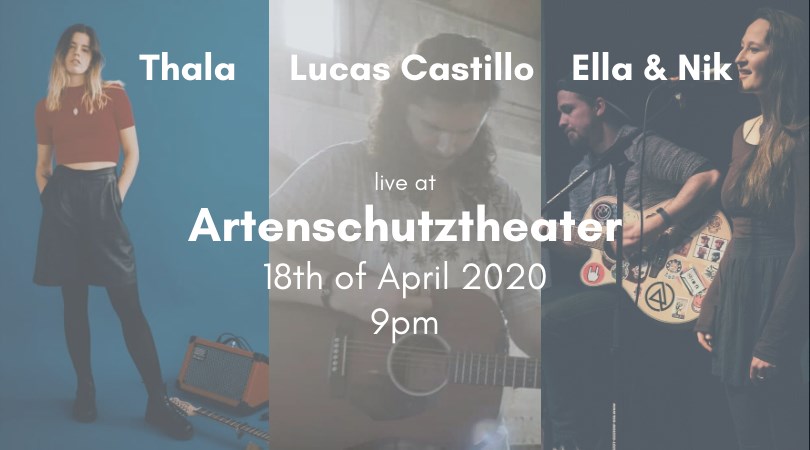 One night – three acts! Come for some lovely dreamy tunes and stay for an unforgettable night.

Once more Ella & Nik find their way back to where it all began and are happy to share the stage with two breathtaking musicians.

Thalamusic:
A dreamy, melancholic atmosphere created by soothing guitar sounds, combined with a velvety soft but edgy voice and thoughtful, metaphorical lyrics – that is Thala in a nutshell. The 26 year old autodidact started performing publicly only last year and has had her biggest show yet at frannz club supporting the US-Band Joseph during their european tour. Strong influences to her sound are bands such as Beach House, Mazzy Star, Fleetwood Mac, Holy Wave and many other surf/psychadelic artists. She is currently working on her first two debut singles to be released in early spring of 2020 as well as an following EP.

Lucas Castillo:
Lucas Castillo is a singer-songwriter born in Guatemala, based in Berlin for 5 years. His musical style can be described as different emotions more than specific genres, as Lucas draws inspiration from memories and feelings that translate into whatever sound feels best. From singer-songwriter to blues, ballads or indie, Lucas seeks to tell stories with his songs that might just resonate with the listeners at different levels.
Facebook: https://www.facebook.com/lucascastillomusic/
Vimeo: https://vimeo.com/369160202/91a7c1381f?fbclid=IwAR339Funja5u4CUow6fxzwkNxVBzPgagJX0Dedi30_rOndR_tNGlQOfflrg
YouTube: https://www.youtube.com/user/LucasCastilloV

Ella & Nik:
The Berliner duo Ella and Nik combine subtle guitar play with a remarkable voice, playing together for no less than 11 years. The folky to almost punky music refuses to be limited to one genre or language, lyrics vary from English to German. Each song has its own story to tell and can lead to tears or raise a laugh and turn the audience into their choir.
YouTube: https://www.youtube.com/channel/UC-rDXeekOdsK2n1r83d-qFg
Soundcloud: https://soundcloud.com/ellaundnik